‘CHICAGO HAS NO LOVE LEFT'
Two women killed in weekend mass shootings mourned by those who knew them, as mayor decries' street justice’ that claimed innocent lives 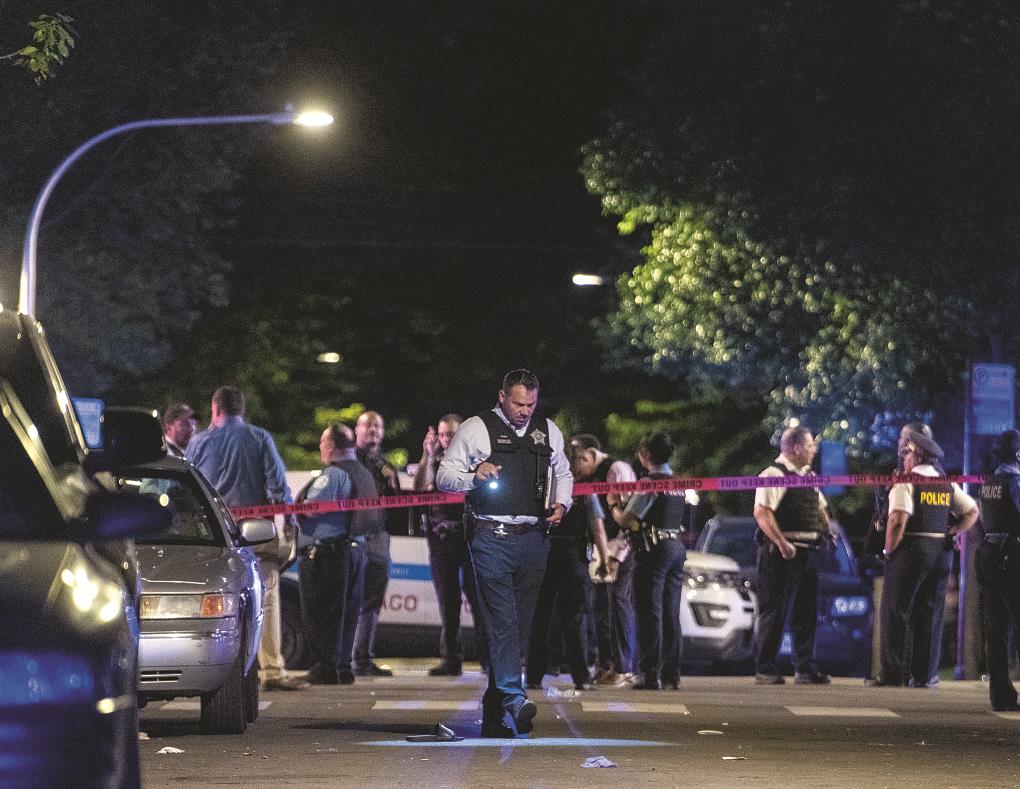 Chicago police investigate the scene where 11 people were shot, one fatally, Sunday night in the 6300 block of South Artesian Avenue in the Marquette Park neighborhood.
PREVIOUS IMAGE


Nyoka Bowie always wanted to be a mother, but she had no children of her own and so took on a motherly role with her group of friends. “She always had the answers to everything, or she’ll figure it out if she didn’t,” said a close friend Sameka, who didn’t want her last name used. “She could always help anybody.”

Sunday night, Bowie was standing with a group of people in Marquette Park when three gang members apparently out for revenge fired into the crowd.

Bowie, 37, was hit in the chest and died. Ten other people were wounded in one of the worst mass shootings in Chicago this year — a year that is on pace to be one of the most violent in decades.

“I feel like a part of me is lost,” Sameka said.

“And I feel like the city of Chicago has no love left.”

Just two hours earlier, about six miles away in South Shore, a crowd of people were waiting for their food outside a restaurant when a gunman opened fire from a black SUV.

Kristina Grimes, 23, was shot six times and was pronounced dead at the University of Chicago Medical Center. Five other people were wounded, including a 15-year-old boy hit in the knee and foot.

Grimes had been a standout swimmer at Willowbrook High School who as a teenager dreamed to one day go to the Olympics, her stepfather, Michael Carr, said.

“She could be a really sweet girl,” Carr said as his voice quivered. “[I’ll] just remember her as a caring person and someone who laughed hard. She always helped people.”

Police said both women appeared to be innocent victims of gang violence.

Mayor Lori Lightfoot said the two attacks stemmed from “internal gang conflicts,” decrying them as “street justice” driven by a “thirst for revenge.”

Lightfoot lamented yet another summer weekend marred by mass shootings, and the wounds inflicted “psychologically” on people left “traumatized” in gang-infested neighborhoods.

“They want to engage in street justice, which is tragic and terrible,” Lightfoot said. “When they aim, they don’t get the target. They get the children and the innocent bystanders who have a right to live in our city without fear of being felled by gun violence.”

City Hall and police officials have stressed that the increase in violence from last year to this year has been slowing, with this June seeing fewer homicides and shootings than last June. Still, last year was one of the worst for gun violence since the mid-1990s, and this year remains on track for even more shootings and homicides.

This June alone, there have been at least 10 attacks where four or more people were shot. Over the weekend, there were four such attacks, the ones in Marquette Park and South Shore and two others where a total of eight people were shot.

About a third of the 78 people shot between Friday evening and early Monday were wounded in just four attacks.

Lightfoot, sounding an all-too-familiar theme, demanded that Chief Judge Tim Evans order the full resumption of criminal trials for the first time since the pandemic.

“We still have too many murderers that are not being held accountable,” she said. “I’m calling on our county partners — and particularly those in the criminal courts: Open up the courts.

“Our criminal courts have been shut down for 15 months,” the mayor continued. “They need to reopen.”

Earlier this month, Evans announced he had asked a committee of criminal justice stakeholders to determine how to safely accelerate the reopening of criminal courts to in-person proceedings, including increasing the capacity for bench and jury trials.

But Evans’ news release noted that the courts “never really closed” and the “administration of justice, including hearings, bench trials, guilty pleas, findings of innocence and dismissal of cases have continued” for the past 15 months.

Lightfoot said anti-violence help offered to big cities like Chicago by President Joe Biden last week includes a crackdown on gun dealers who are “selling to criminals and straw purchasers.”

Already this year, the Chicago Police Department has taken “almost 6,000 crime guns” off the streets, Lightfoot said, calling that a “fraction of what’s out there.”

As for the weekend attacks, the mayor said Chicago police detectives “have some promising leads,” though Police Supt. David Brown sounded less enthusiastic at a later news conference.

Brown said the Marquette Park shooting in the 6300 block of South Artesian stemmed from a yearlong gang conflict in which the gunmen were seeking retaliation. Bowie was an innocent bystander, while one of the wounded men was targeted, he said.

The shooters’ car was seen but detectives have no license plate or description of the shooters, Brown said.

In the South Shore shooting, detectives know the gunfire came from an SUV but don’t have a plate number.

Bowie, the victim in the Marquette Park shooting, was known as “Yogi” to her friends. “Anytime you need something, it was always, ‘Ask Yogi,’” Sameka said.

Bowie’s apartment, which she rented from Sameka’s father, was a “sanctuary” for her friends. She loved to cook for them, especially breakfast after a long night out.

“She was just so much fun, it was never drama or anything with her, she was just an all-around good person and a good friend,” Sameka said. “She was a good confidant.”

Sameka, who now lives in Tennessee, was born and raised in Chicago but said she’ll “never live there again” because of the violence. “I’m surrounded by death.”

Grimes, killed in the South Shore attack, was preparing for the next chapter in her life. About two weeks ago, she had called Carr and told him she was looking for a job.

“She said, ‘I miss you, I miss your smile. We’ve got to get together, go out for lunch,’” Carr recalled. “And [that was] the last thing I heard from her.”

Carr said he has been in tears for most of the day since he found out shortly before 4 a.m. that Grimes had died. He said she was a sweet and intelligent woman, and he fondly recalled the trips they took, like to Sanibel Island in Florida, where they went kayaking in the ocean.

Carr, who lives in Romeoville, moved out of the city in 2002 and “vowed never to move back.”

“We all got to come together and do together,’ he said. “Seventy shootings in one weekend ...I don’t think we can go in Iraq and find 70 shootings over the weekend.”