The pandemic, and everything else: ‘Our first responsibility is caring for ourselves’ 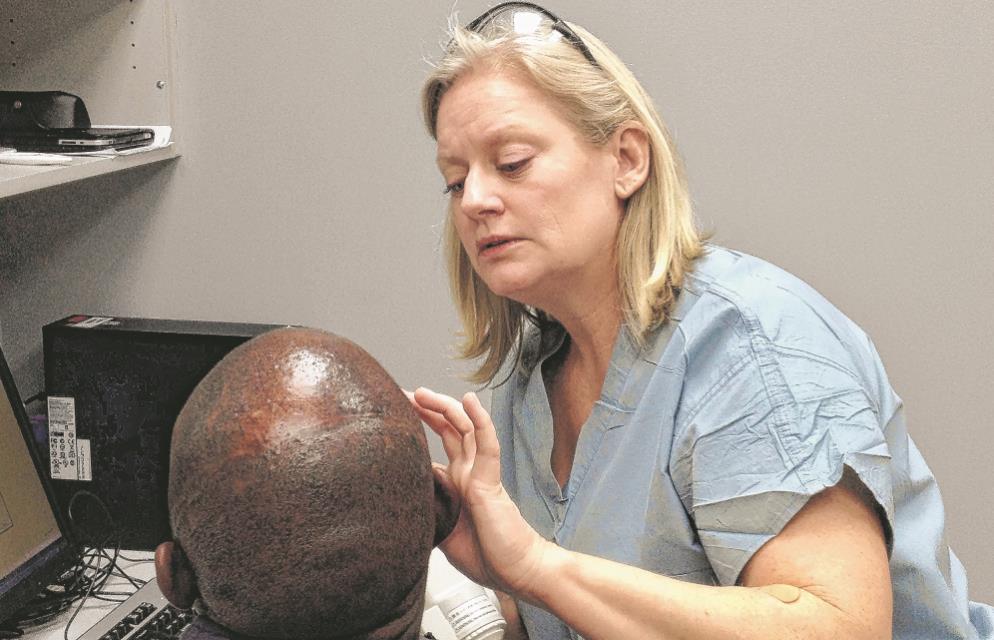 Rosemary Seelaus,an an aplastologist at UI Health’s Craniofacial Center, fits a prosthetic on a patient whose features have been distorted by disease. Like all caregivers, she needs to look after herself in order to look after others.
NEILSTEINBERG/SUN-TIMES
PREVIOUS IMAGE


Once I met a man who had no nose.
Well, he had a nose, but it was made of silicone. A fake nose, held in place by magnets on four metal posts embedded in his face.

He wasn’t wearing his artificial nose when we met, at the UI Health’s Craniofacial Center. He was sitting in the examining room of Rosemary Seelaus, an anaplastologist — a medical specialist who makes facial prosthetics. I shook his hand, trying to focus on his eyes.

Our meeting rattled me, and afterward I had this thought: “I am NEVER... going to complain about ANYTHING... ever again!” Because this guy didn’t ask for whatever nasal cavity cancer put a big hole in the middle of his face. And he still woke up, brushed his hair, took his fake nose off his dresser and popped it into place, and went off to face the day. My woes dwindle to insignificance compared to that.

But life doesn’t work that way. We live in difficult times. This plague showed up about February 2020, seemed like it was going away for about 15 minutes in June 2021. Now it’s August and it’s not only back, but starting to feel like the general crisis — medical, social, political — will never end. It’s getting to people.

“In reality, I’m barely hanging on sometimes,” S.E. Cupp, whose column appears in the Sun-Times, wrote on Twitter last week. “I’m anxious all day every day about my kiddo, my health, my job, my parents, my friends, my causes, my community, my country ... the truth is, it takes a huge toll. I’m sorry to vent and lay this all out there. But I’m burnt out.”

That takes guts. I’m reluctant to say “I’m burnt out.” It would just spark a chorus of trolls. “You sure ARE, Stinkberg. Why don’t you go hang yourself?” Plus my boss pursing his lips. “Hmmm, he IS burnt out. I mean, three columns on picking up after his dog ...”

But I can’t leave Cupp out there by herself. I feel obligated to stand with her, like the other slaves standing and saying, “I am Spartacus.” I am burnt out, too. I must have scattered a half-dozen typos in a single column last week. The copy desk plucked them out with tongs, a raised eyebrow and a polite “Do these belong to you?”

I’m a metaphorical guy. Sometimes I’ll say, “I’ve lost my horizon.” I like that, because I can both confess to experiencing difficulty, yet the person I’m telling may have no idea what I’m talking about. Losing your horizon is a grave situation, aeronautically — a pilot who loses his horizon is disoriented, doesn’t know which way is up, and can power his plane into the ground when he thinks he’s climbing. It’s a crisis.

So what to do? As soon as I read Cupp’s tweets, I put in for vacation and circled back to Rosemary Seelaus, who for 15 years has skillfully constructed facial appliances, treating the burned, the maimed, those so differently configured they have trouble going out in public. A tough job. Does her work ever get to her, and what does she do when it does?

“There’s no doubt that at times, things can feel heavy, and you just need a break,” she emailed back. “At the end of the day, as health care practitioners, our first responsibility is caring for ourselves. If we don’t do that, we’re not in a good position to help others.

“I pay attention to my energy, and if I notice myself feeling taxed or becoming too much like a ‘sponge’... i.e., carrying everything home ... I do something to adjust my vulnerability, i.e., change my exercise routine, meditate, make a point of spending more time with friends/family, dating,” Seelaus wrote.

“I guess it’s about paying attention to the balance. I actually often swim during my lunch break. (3x this week!) It helps me to focus; it is fully ‘me time,’ is meditative, contributes to my own health and well being ... and it often is the perfect mental break in the middle of a busy clinical day. And, I return to the clinic with more energy and a clear mind. And, I ALWAYS make a point of getting outside! (Regardless of the season).”

Good advice. Reach out to people, as S.E. Cupp did. Exercise. Get outdoors. Be strong, which sometimes requires admitting you’re feeling weak. The world is going through a lot, true, but it’s still a magnificent world. Remember what Hemingway wrote in the 1930s, another time when things were sliding to hell. “The world’s a fine place, and worth the fighting for.” It still is.