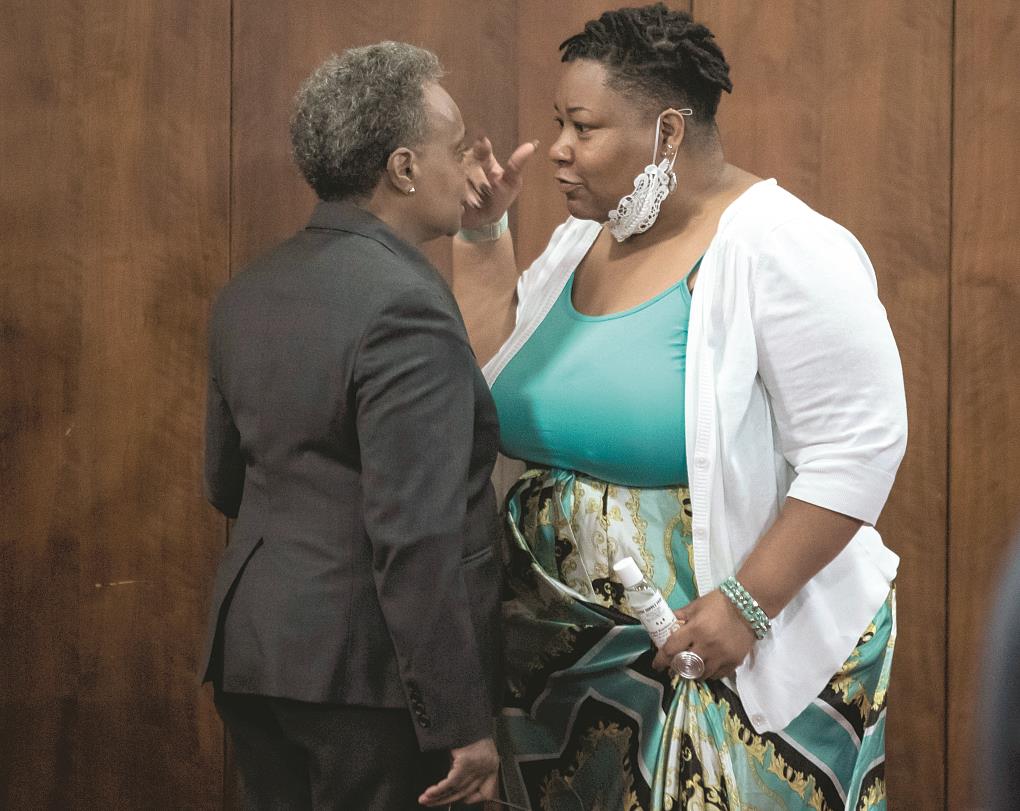 Has Mayor Lori Lightfoot lost control over a City Council that was a rubber stamp for her predecessors?

It sure can seem that way, judging from the chaos that cut short Wednesday’s City Council meeting and derailed a highly anticipated showdown on a controversial proposal to rename Lake Shore Drive in honor of Jean Baptiste Point DuSable.

It all started when Lightfoot went out of the regular order of business to allow Budget Committee Chairman Pat Dowell (3rd) to deliver her committee report first.

That paved the way for immediate consideration of the mayor’s appointment of Celia Meza as the first Hispanic woman to serve as Chicago’s corporation counsel.

But Ald. Ray Lopez (15th), one of Lightfoot’s most outspoken City Council critics, had other ideas.

He joined Ald. Jeanette Taylor (20th) in a motion to delay consideration of the Meza appointment on behalf of Anjanette Young, the woman whose home was the site of a botched raid by police who had the wrong address.

Last week, Meza filed a motion to dismiss Young’s lawsuit against the city after Young refused to accept what her attorneys viewed as a “low-ball” offer from the Lightfoot administration to settle the lawsuit for $1 million.

“This was about the mistreatment of Anjanette Young. Nothing more. Nothing less. This was not a slap in the face or some disrespect to the Latinx community,” Taylor said.

“At the end of the day, corporate counsel needs to remember they work for the constituents of the city of Chicago and stop siding with the mayor. ... And we should not get up and have tears and say we would hate it if this was our mother or this was our daughter, then turn around and do something different.”

After Ald. Nick Sposato (38th) moved to adjourn the Council meeting and reconvene at 11 a.m. Friday, Lightfoot called for a recess.

The mayor then walked off the rostrum, onto the City Council floor and toward the back of the chambers, where Taylor was seated behind a pillar.

The two strong-willed women who have clashed repeatedly over the last two years then engaged in a heated argument that clearly did not go well. Lightfoot looked disgusted as she walked slowly back toward the rostrum.

“She was pointing her finger in my face, telling me I disrespected a woman of color or I cut a woman of color. Don’t try to do that. What you’re doing to Ms. Young is wrong,” Taylor told the Sun-Times.

“She was doing the yelling. I told her to get her finger out of my face and to stop yelling at me. I’m not a child. I don’t work for Lori Lightfoot. We are co-workers. The sooner she understands that, the better off she’ll be.... You don’t do that to people. I would never do that to her — ever.”

Asked if she believes Lightfoot disrespected her, Taylor said, “Most definitely she did — in a way that she needs to apologize for.”

That allowed for immediate consideration of the mayor’s appointment of Annette Nance Holt as the first Black woman to serve as Chicago’s fire commissioner.

After that, Sposato withdrew his motion to adjourn.

Meanwhile, Meza took her seat at Lightfoot’s side on the rostrum. The corporation counsel is normally seated at the mayor’s side during Council meetings to serve as parliamentarian.

Meza was Lightfoot’s counsel and senior ethics adviser when the mayor promoted her to replace Corporation Counsel Mark Flessner, who was forced out in the political fallout from the police raid on Anjanette Young’s home.

At the time, Lightfoot claimed not to know about Flessner’s attempts to block WBBM-TV (Channel 2) from airing body cam video of the raid, which showed a crying, naked Young repeatedly asking officers what was going on as they continued to search her home. Police, it turns out, had raided the wrong address.

After Holt’s appointment was confirmed, Harris moved to adjourn the meeting and reconvene at 1 p.m. Friday.

Indicted Ald. Edward Burke (14th), the resident expert on Robert’s Rules of Order, rose to defend Beale and say Beale’s motion to table Harris’ motion to adjourn was “not debatable.”

“Standing up and yelling without seeking recognition is not something that’s appropriate,” the mayor told Burke, her political nemesis, as Burke pointed his finger at the mayor from his seat.

“I have considered your appeal, and I’ve denied it.”

The Council then voted on Harris’ motion to set the date and time of the next meeting for 1 p.m. Friday.

Harris then moved to adjourn one of the more bizarre City Council meetings in memory. Beale rose to table the motion. Lightfoot ruled the motion to adjourn “takes precedence.”

Another roll call was taken. The vote to adjourn was approved by the much-closer vote of 27-22. Lightfoot banged the gavel. The meeting was adjourned.

An anticipated showdown vote on the proposal to rename Outer Lake Shore Drive in honor of DuSable will just have to wait until Friday — maybe. So will final City Council approval of Lightfoot’s sweeping pandemic protection plan, including business reforms, worker protections and a midnight curfew on the sale of alcohol.

After the meeting, Taylor found herself in an unlikely alliance with Burke.

“She thinks she can do what she wants to do. You’ve got to follow rules. What’s the point of having Robert’s Rules of Order if you’re not gonna listen?” Taylor said.

“Ald. Burke is the oldest alderman there. He’s trying to tell her the way it’s supposed to go. And she’s doing what she wants to do. She needs to follow the rules. Just because she’s the mayor don’t mean she don’t have to follow rules.”

Ald. Carlos Ramirez-Rosa (35th) agreed, tweeting, “Mayor Lightfoot is our presiding officer. It’s clear she needs to take a training on Robert’s Rules and how to properly chair a meeting. She consistently abuses of her chair position to ignore or block motions that are in order” About two hours after the meeting, the mayor issued a statement that attempted to shift the blame to the “small group” of aldermen, who, she claimed “brazenly created a spectacle and did a disservice to their constituents” in the process.

“As a result of their cynical actions, the City Council failed to pass protections and relief for our hotel workers, primarily Black and Brown women, who were most impacted by the pandemic, and our small businesses,” Lightfoot was quoted as saying.

“On Friday, we look forward to continuing our work on behalf of Chicagoans.’’