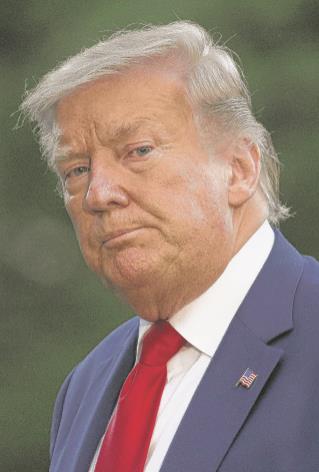 God knows, former President Barack Obama tried and he couldn’t figure out a nationwide fix for police misconduct or structural racism, and President Donald Trump doesn’t have it in him to do better, with the killing of George Floyd in Minneapolis the latest example of Trump making a horrific situation worse.

On Sunday, Chicago and other U.S. cities already battered by COVID-19 and the economic meltdown it triggered were under siege as looters used the Floyd tragedy as an excuse to pillage and burn.

The looters in the Chicago area were able to do something the coronavirus infections could not, even at the height of the stay-at home lockdown: bring the city to a halt.

The CTA was suspending Sunday night transit; Metra stopped running trains downtown in the afternoon; the Illinois National Guard was called out to back up the Chicago police; and the odds are the Wednesday planned start of outdoor dining and other reopenings won’t happen.

And then there is that other disease — the combination of distraction, deflection and deceit — displayed by Trump on Sunday, in a cunning, divisive tweet.

“The Lamestream Media is doing everything within their power to foment hatred and anarchy,” Trump said in a tweet. “As long as everybody understands what they are doing, that they are FAKE NEWS and truly bad people with a sick agenda, we can easily work through them to GREATNESS!” Trump believes if he makes everything about the media — even the demonstrations and looting — everything but police misconduct — he will win a second term.

Everything is on video, so you can see for yourself — including how last Monday, white Minneapolis police officer Derek Chauvin held Floyd, an African American, to the ground, resulting in his death. Videos show the greed of looters hauling merchandise out of stores.

On Friday, which seems a century ago, former first lady Michelle Obama said in a tweet, “Like so many of you, I’m pained by these recent tragedies.” “And I’m exhausted by a heartbreak that never seems to stop. Right now it’s George, Breonna, and Ahmaud. Before that it was Eric, Sandra, and Michael. It just goes on, and on, and on.”

Besides George Floyd, Obama’s references are to Breonna Taylor, killed during a police raid in Louisville, Kentucky, and Ahmaud Arbery, who was killed during a jog outside Brunswick, Georgia, at the hands of a white father and his son.

Obama could likely be talking about Eric Garner, who uttered “I can’t breathe” as New York police officers held him in a fatal chokehold while arresting him; Sandra Bland, the suburban Naperville resident who died in a Texas jail, taken in after a traffic stop; and Michael Brown, an unarmed teen in Ferguson, Missouri, whose death by a white police officer sparked national outrage.

Obama’s roll call — she didn’t mention Laquan McDonald, the Chicago youth shot by a police officer — are names that jump in and out of the news and then fade.

We get lulled into “casual acceptance,” Foxx said, with “racial disparities in health care,” made clear when the pandemic showed that African Americans and Latinos were disproportionately infected. There is “the casual acceptance that we have people living in communities that don’t have access to health care. That we just accept it.” Trump wants to exploit that “casual acceptance” to divert our attention to what he says is a scheme by the radical far left — “the Antifa” — to spark the violence we’ve seen. He said in a Sunday tweet he wants to designate it a terrorist organization.

Of course, there is no excuse for looting.

Still, Trump doesn’t want you to believe what you can see with your own eyes. Trump, following a day filled with videos of people protesting across America — peaceful demonstrations and riots — tweeted “FAKE NEWS.” Trump, before that, tweeted “LAW AND ORDER.” It’s a two-way street, this law and order: Systemic police misconduct was an issue for Obama and it remains one for Trump. He can’t tweet it away.

Said Foxx, “If we continue to talk about the fringe element who’s tried to hijack this, and not about the men and women who died in the systems that have allowed for their deaths to go unpunished, we’ll learn nothing from this.”